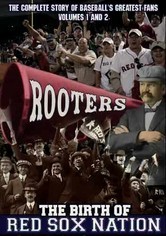 2007 NR 2 discs
Two hundred "Roxbury Rooters" united in 1897 to support their favorite team, the Boston Red Sox. Over the next century, these loyal fans became the millions of diehards known as Red Sox Nation, whose tradition is honored in this spirited documentary. Players, historians and fans alike -- including Johnny Pesky, Peter Gammons, Nuf Ced and Honey-Fitz -- testify to the cause of the Fenway Faithful, from its modest past to its phenomenal present.