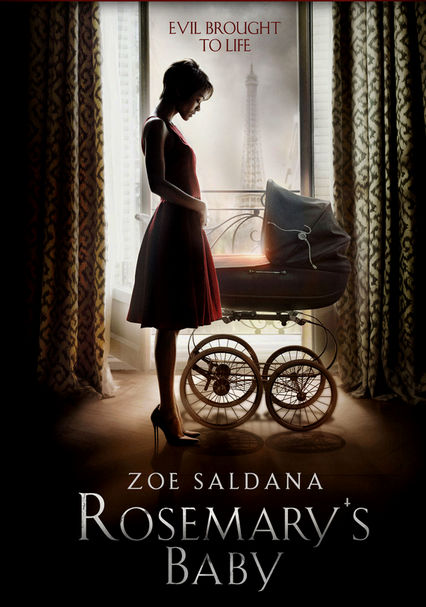 2014 NR 2h 50m Blu-ray / DVD
After relocating to Paris, Rosemary and Guy Woodhouse receive an offer they can't refuse: an apartment at the city's most prestigious address. But the couple soon discovers that the devil is in the details.

Parents need to know that Rosemary's Baby is a miniseries based on the Ira Levin novel about a young couple whose pregnancy goes very wrong. The level of violence and gore is very high, and includes images of cannibalism, dismembered body parts, murders, pools of blood and gore and dead bodies. Since the plot is connected with pregnancy, there are many scenes of body and medical horror that can induce fears of procreation or doctors. There are also scenes that contain sexual violence, such as one in which a prostitute is murdered during sex and her murderer cuts out her heart and chews on it. Some scenes take place at bars; no one acts drunk. Cursing is mild ("hell," "damn"), but there is other rough language including a scene in which a woman is called a "whore." This production is violent and scary and not for young viewers.

A married couple frequently refers to sex; we see them in bed in lingerie, necking. A prostitute (referred to as a "whore") is killed during sex and her heart is ripped out and chewed on by her murderer.

Gory, possibly disturbing violent images include a woman eating raw, bloody meat; a character suddenly stabbing and killing another with spouts of blood; a woman slitting her own throat; a supernatural sexual assault; bloody dismembered body parts; a man eating a woman's ripped-out heart; scenes of trauma connected with pregnancy, and so on. A supernatural sexual assault takes place onscreen; the audience mostly sees brief images.

Some scenes take place in a bar or at parties at which people drink cocktails; no one acts drunk.