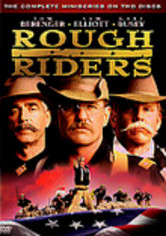 1997 NR 2 discs
To help the Cuban rebels struggling against Spanish rule, gung-ho Naval Secretary Theodore Roosevelt (Tom Berenger) created the first U.S. volunteer cavalry regiment in 1898. The motley crew of about 500 fighters had to learn to work together as a team against a superior adversary. This rousing war epic -- co-starring Gary Busey and Sam Elliott -- depicts the true story of the "Rough Riders" and their part in the Spanish-American War.