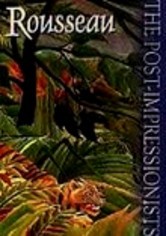 2001 NR 0h 50m DVD
Henri Rousseau spent his life working as a customs official, but his artistic passion led him to become one of the most revered Postimpressionist painters of the 19th century. Working in the naive or primitive style, he was criticized for his childlike techniques during his lifetime, only to be recognized as a self-taught genius after his death. Location footage, re-creations and commentaries from art experts are included.