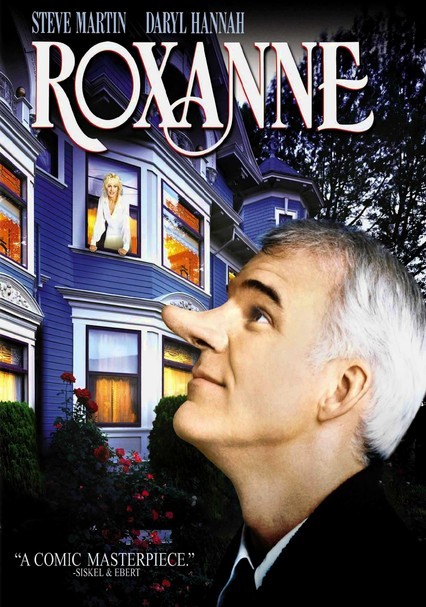 1987 PG 1h 47m Blu-ray / DVD
Fearless small-town firefighter C.D. Bales (Steve Martin) is seriously smitten with beautiful stargazer Roxanne Kowalski (Daryl Hannah) but is self-conscious about his exceedingly long nose in this contemporary take on "Cyrano de Bergerac." So he takes advantage of the fact that the fair maiden has also captured the fancy of C.D.'s handsome but tongue-tied chum Chris (Rick Rossovich) and woos her vicariously through his handsome rival.

Parents need to know that Roxanne is Steve Martin's update of the classic play Cyrano de Bergerac. It's sweet and charming and ultimately has a worthy message about having to believe in yourself to find true love. This 1987 romantic comedy also is edgier than its PG rating might suggest. There's frequent innuendo (some related to the size of Martin's character's nose) and talk of sex (including fleeting oral-sex references), as well as a scene in which costar Daryl Hannah runs around naked after being locked out of her house (no sensitive body parts are shown, but she's clearly nude). Characters also swear ("s--t," "a--hole") and drink socially. Martin's character is sensitive about his unusual facial feature, and he kicks, punches, and otherwise manhandles some of those who insult him. Two of the main characters collaborate on a deception that hurtfully misleads another, but truth and honesty eventually rule the day.

Frequent innuendo and suggestive language, including in relation to C.D.'s large nose ("finally, a man who can satisfy two women at once"). Roxanne runs around naked after being locked out of her house; no sensitive body parts are seen, but there are glimpses of her bottom. References to oral sex. Characters talk about sex ("I mistook sex for love") and reference things such as Playboy magazine in come-on lines.

C.D. uses a tennis racket and his feet to hit and batter two drunk jerks who insult him. He also punches a rude man in a bar and manhandles others who are rude to him.

Although much of the movie involves deception and pretending to be someone you're not to impress someone else, ultimately characters learn that they're much happier when they're true to themselves and one another. Honesty and self-acceptance are the foundations of lasting love.

Adults drink wine and beer in bars and restaurants; reference to cocaine in the scene in which C.D. comes up with alternative insults to "big nose." C.D. drinks a slug of alcohol at one point to gird himself for a medical procedure (which doesn't end up happening). Two obviously drunk men insult C.D.