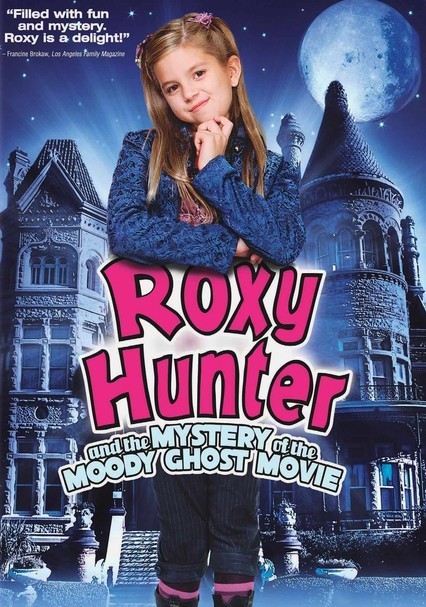 2007 TV-Y7 1h 33m DVD
Precocious 9-year-old Roxy Hunter finds life in Serenity Falls far from serene when the old manse she moves into with her mom and best friend turns out to be home to a ghost. But Roxy soon learns that restless spirits are the least of her worries.

Parents need to know that the main character in this kid-paced mystery is a young girl who acts more like a teenager than a 9-year-old. She's opinionated, strong-willed, and bossy, especially around her best friend, a 12-year-old boy who usually follows her lead rather than argue with her. She also disregards the rules to follow leads on cases, and in at least one scene she actually breaks the law (she steals confidential bank documents). But on the flipside, she's determined and dedicated to what she believes is right, and she always sees things through to the end. Tweens -- especially girls -- will enjoy her adventures, and parents will be happy knowing there's little other content here to worry about.

A 9-year-old girl refers to a tween as her "fianc."

In one scene, a gunshot is heard, followed by a woman's scream, and a man is shown holding a shotgun that has punctured a hole in the ceiling. A boy is kidnapped and locked in a building; his friends are told that if they don't cooperate with the villains, he'll die. Ordinary sounds (bumps, creaks, branches hitting the window) are briefly implied to be made by ghosts.

No cursing, but there's sporadic name-calling among kids ("dimwit" and "pumpkinhead," for example).

Roxy is controlling and bossy toward her best friend (and tries to be toward adults), and she often disobeys her mother when she's wrapped up in sleuthing. She traipses through town by herself (against her mom's wishes), snoops through confidential files, and steals bank documents. But her actions are noble in spirit, as she's trying to save her home from destruction and reunite long-lost loves. Roxy also learns to accept the idea of her widowed mom dating again.