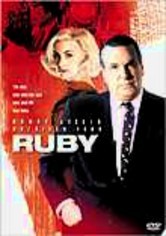 1992 R 1h 41m DVD
Who was Jack Ruby? In this film, Danny Aiello plays the enigmatic Ruby, tracing the path he took that led him to his tragic date with history. Ditching Mafia life in Chicago, Ruby opens a strip joint in Dallas and meets Candy Cane (Sherilyn Fenn), an exotic dancer who becomes a close friend. Although he's no longer "made," Jack nevertheless keeps close ties with the Mob, which may -- or may not -- have led to his assassination.