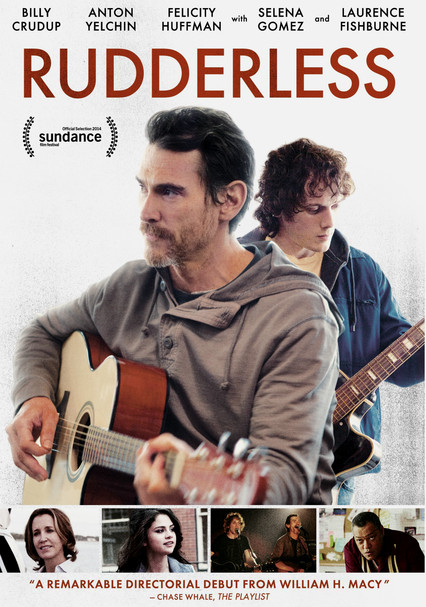 2014 R 1h 45m DVD
Devastated over his son's death, former ad exec Sam removes himself from society to drink away his grief. When he summons the will to perform his son's songs at a local bar, the music gains popularity and Sam claims to have written the tunes himself.

Parents need to know that Rudderless takes place in the aftermath of a terrible tragedy (a college shooting), and the main character is in full retreat from the world. Once a successful executive, he's now living on a small boat, painting houses and drinking most days, trying to assuage the memory of his beloved son. He gets quite drunk on many occasions; some scenes also feature people smoking pot. Expect lots of swearing ("f--k," "s--t," "a--hole," and more) and some emotionally complex and heavy themes -- all of which make Rudderless best for older teens and up.

A shy young man flirts tentatively with a group of girls. Couples are shown kissing in the background at a party.

A man tries to kiss his employee while drunk; she rebuffs him, swatting him away. Two men get into a brief scuffle that leaves one with a black eye. The film revolves around an act of senseless violence that's never seen but often discussed.

Sometimes it's hard to face deeply unpleasant truths, but pretending they don't exist doesn't make it so. Sam spends a good portion of the film hiding from a tragic incident in the recent past; he's only able to move forward with his life when he acknowledges what happened.

After a tragedy, the main character retreats from life and becomes a semi-functional alcoholic. He drinks, beer, whine, whisky, and plenty of other things and gets pretty drunk in several scenes. A few sequences also show people smoking pot.