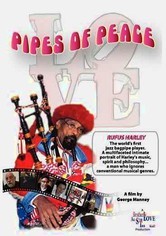 2007 NR 0h 53m DVD
The uniquely talented Rufus Harley gained acclaim for being the first-ever bagpipe-playing jazz musician. Through interviews with Harley and his family and friends, learn the wonderful story behind this man's life and passion for music. Harley first became interested in playing the bagpipes after seeing on television the traditional Scottish instrument being played at John F. Kennedy's funeral.