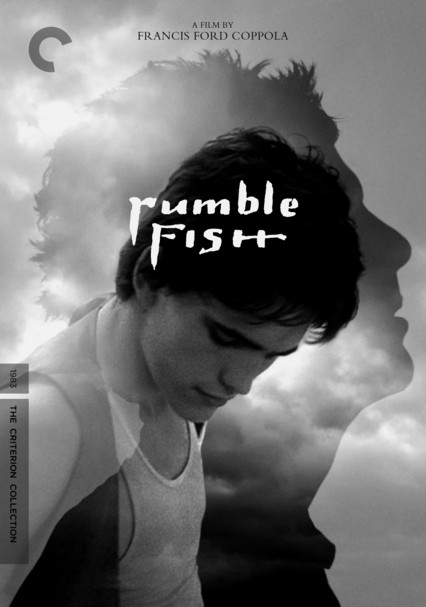 1983 R 1h 34m Blu-ray / DVD
In Francis Ford Coppola's black-and-white adaptation of the S.E. Hinton novel, Rusty James (Matt Dillon) is the leader of a small, dying gang once led by his now-absent brother, Motorcycle Boy (Mickey Rourke). When Rusty is injured in a gang fight, his brother returns to their sad, industrial town to help. Despite this, Rusty continues on his path of self-destruction, damaging his relationships with his girlfriend (Diane Lane) and friends.

Parents need to know that the raw moments include a sex-party scene exhibiting female and male nudity (erotic-daydream fantasies about a pretty girl wearing very little in a classroom are slightly less explicit). There's also gang-fighting (arranged like a duel, with all the kids turning out to watch at the appointed time), a mugging and beating with a tire iron, and reckless driving on a motorcycle (no helmets), plus one fatal shooting. There is much drinking/drunkenness and cigarette smoking as well, and heroin use and addiction is discussed (and disparaged). Swearing at R-level emphasizes the f-word, and the lead character speaks glowingly of the street-gang lifestyle, though other characters work to change his mind.

Topless girls in panties, bare male buttocks in an orgiastic party. Rusty James has an ongoing sexual relationship with girlfriend Patty, though we just see close cuddling. In a series of daydream fantasies he imagines her in skimpy lingerie draped all over his school classrooms.

Brutal beatings and kickings, a stabbing, and an (offscreen) fatal shooting. A motorcycle runs down a child.

Rusty James' hero-worship of his brother Motorcycle Boy is misplaced, and he has to shake off his ideals of street-fighter heroics. There's the question of whether Motorcycle Boy is truly brilliant or just a mentally ill misfit. There's also a suggestion that a broken home (the mother's desertion) has ruined forever both the left-behind husband and the son old enough to comprehend what was happening. A sub-theme: the urban environment breeds gangs and violence, and people in cities are compared to animals in cages, though the only solution -- get outta there! -- is a bit simplistic. (And, for Motorcycle Boy, too little too late.)

Extensive underage and adult liquor drinking and cigarette smoking. Rusty's father is an alcoholic. A marauding character is said to be on pills. Talk of heroin use, in a negative context -- that it ruined the "fun" of being of being in a gang, among other things -- and a supporting character is described as miserable junkie.