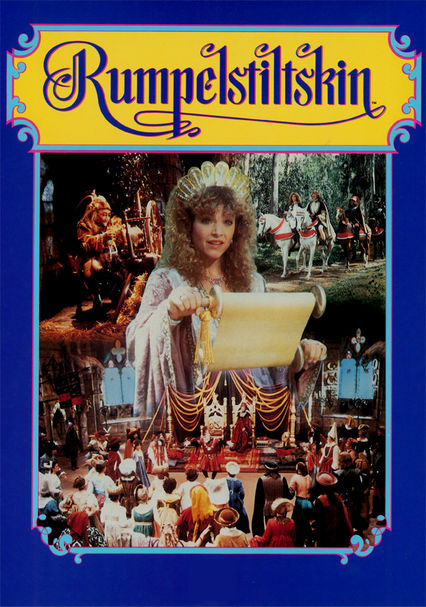 1987 G 1h 24m DVD
An anguished girl ends up in the king's dungeon after her father falsely proclaims that she can turn grain into gold. But her luck changes when a magical troll shows up to help her spin her fortune -- and marry the prince.

Parents need to know that Rumpelstiltskin is an '80s musical retelling of the classic fairy tale, which was released as part of the Cannon Movie Tales series. Although the movie does contain a lot of fairy tale stereotypes (beautiful, poor maiden who wants to marry a prince, love at first sight), there are some moderately positive messages, about the dangers of bragging and that having a good heart will help you conquer all. The content is mostly clean, with some mild sexy stuff (a couple of kisses, some flirting) and one scene that shows beer drinking. Some very young kids may find Rumpelstiltskin -- who's portrayed as sinister and scheming -- and the wicked king and queen somewhat scary, though the film is definitely less frightening than other '80s fantasy flicks such as Labyrinth and Willow.

Threats by the king and queen to kill Katie if she can't turn straw into gold; a somewhat sinister elf who wants a boy for a slave; a couple of moderately suspenseful and slightly scary scenes.

"When you're good, and smart, and kind of heart, there's nothing you can't win." Bragging can have unintended consequences. Positive messages are somewhat undermined by superficial focus on beauty and royalty.