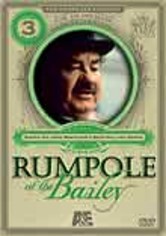 1988 NR 2 discs
In the fifth season of the hugely popular television series, barrister Horace Rumpole (Leo McKern) makes room at home for his colleague, Claude Erskine-Brown (Julian Curry), who gets kicked out of his house. Later in the season, Erskine-Brown heads the prosecution while Rumpole defends his clergyman nephew against adultery charges in ecclesiastical court. Watch for young Elizabeth Hurley's appearance in "Rumpole and the Barrow Boy."