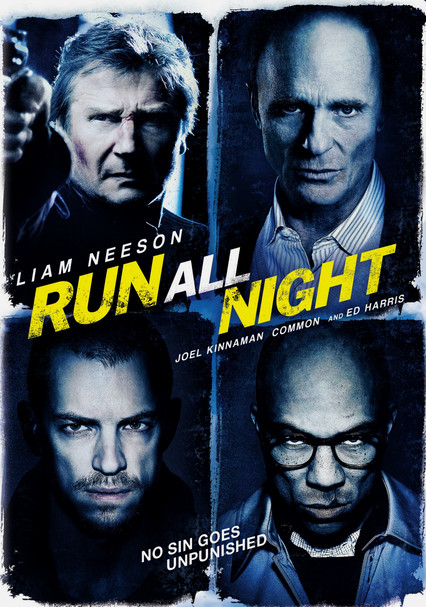 2015 R 1h 54m Blu-ray / DVD
Though hard-drinking Jimmy Conlon left behind his career as a mob enforcer years ago, he's forced to revive his lethal skills to protect his family when his son runs afoul with Jimmy's former boss, Shawn Maguire.

Parents need to know that Run All Night is a revenge-driven action thriller starring Liam Neeson. The main character struggles with his past as a hit man and tries to find redemption, and his son tries not to follow in his father's footsteps by being a good father to his own children. But there's a high body count and tons of violence, with shooting, fighting, stabbing, bloody wounds, and blood spatters. There are also fires (a character's face is burned), explosions, car chases, and car crashes. Extremely strong, frequent language includes "f--k," "s--t," and much more; there's also some very strong (albeit occasional) innuendo. Minor characters are drug dealers and are seen snorting cocaine. A packet of heroin is also shown, and pot is referenced. The main character is often shown drunk, but he stops drinking while on the run. Messages of actions and consequences play into the story, which could provide some discussion for older teens.

Themes include both revenge and finally accepting the consequences for your actions. A son tries to make up for his father's wrongs by being a good dad to his own kids and a mentor to others.

Applebee's and Google Maps are mentioned.

A main character is shown drunk and passed out in a bar. He's also drunk while playing Santa (upsetting some children). The main character smokes cigarettes regularly. A minor character snorts cocaine. A packet of heroin is shown. Minor characters are drug dealers. A reference (in a song) to smoking pot. Some scenes of social drinking.