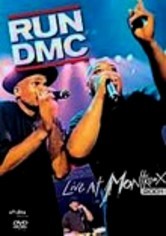 2001 NR 1h 6m DVD
Filmed live at Montreux in 2001, this concert was Run DMC's last performance before the untimely death of Jam Master Jay in 2002. The groundbreaking band helped define rap music, releasing numerous hit singles and albums starting in the 1980s and influencing a generation of musicians. Songs include "It's Like That," "Run's Freestyle," "Down with the King," "Got to Be Real," "It's Tricky," "King of Rock," "Walk This Way," "School of Old" and more.