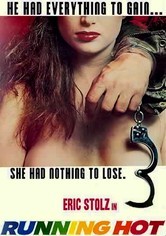 1984 R 1h 35m DVD
After he's unjustly sentenced to death for the murder of his father, 17-year-old Danny Hicks (Eric Stoltz) enlists the help of his new pen pal -- 40-something prostitute Charlene Andrews (Monica Carrico) -- to bust out of prison. Following the escape, the star-crossed lovers hit the road with the cops hot on their tail and embark on a desperate search for the real culprit behind Danny's father's murder.