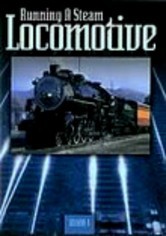 2006 NR 1h 15m DVD
Nothing captures the imagination like trains, especially the powerhouse steam locomotives of yesteryear. This edition of the acclaimed video series gives viewers a detailed look at the Southern Pacific's #2472, hosted by Neil Vodden and John Teshara, the men who ran the engine when it was still in regular service. Novices and experienced enthusiasts alike will thrill once again at the raw power of the mighty iron horse.