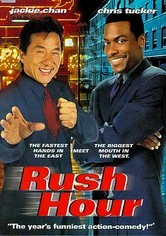 1998 PG-13 1h 37m Blu-ray / DVD
When Hong Kong inspector Lee heads to Los Angeles to investigate a kidnapping, the FBI assigns cocky LAPD cop James Carter to distract Lee from the case. Not content to watch from the sidelines, Lee and Carter form an unlikely partnership.

Parents need to know that there is a lot of action and fighting in this film. While in scene after scene, the violence is meant to be funny, exaggerated and admired for Jackie Chan's martial artistry, the destruction is still considerable. A child is kidnapped and held captive. There are gunfights; buildings are blown up; two men are shot point-blank while trying to protect the little girl; there are car chases and crashes; and participants are threatened with multiple weapons, including rifles, guns, and axes. Swearing and harsh language ("s--t," "ass," other vulgar expressions, and some racial slurs) are heard throughout the film, and, like the action, it's meant to be mostly comedic and to define the characters. Marijuana use is featured in a bar scene, referred to upon occasion, again with humor as a goal.

A girl briefly dances provocatively in a T-shirt; there's one reference to "sleeping together."

Extensive martial arts fighting throughout. Though it's definitely cartoon-like action in most instances, there are bodies strewn on the floor after a fight; there's a point-blank shooting of two bodyguards; and some minor bloody injuries are shown. A little girl is kidnapped and held captive; she's seen struggling with her assailants. There are lots of gun fights, car chases, accidents, and explosions.

Frequent swearing with repeated use of "s--t," "ass," "Goddamn," "hell." Sprinkled throughout is other coarse language: "kiss my fat ass," "punk bitch," "balls," etc. A few racial slurs are used: "Chun King Cop," "Mr. Rice-A-Roni," and the "n" word is uttered for humor by an African-American police officer, then copied by his Asian counterpart.

Appearances can be deceiving: a police officer who seems to be inept and out-of-control turns out to be heroic and responsible under extreme conditions. People of disparate cultures can learn to respect one another and work together to reach a positive outcome.

There's some discussion of marijuana which is intended as comedy. Several characters are seen smoking it or are stoned, with one ironic comment "That's bad for you." There's a champagne toast, beer consumed at a card game, and one villain smokes.