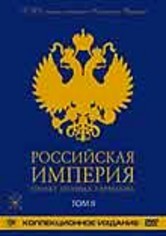 2004 NR 2 discs
The result of an enormous undertaking by filmmaker Leonid Parfyonov, this sweeping series produced for Russian television celebrates the tricentennial of the Russian Empire (born with the founding of Saint Petersburg in 1703 by Czar Peter the Great) by documenting its fascinating personal history in living color. This installment (the second of four volumes) examines the contributions of Paul I, Empress Maria and Alexander I.