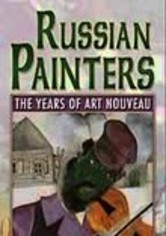 2002 NR 0h 50m DVD
Russian art -- which boasts an impressive cultural legacy -- flourished in the 20th century's first decade, with art nouveau playing a prominent role. Featuring a fresh, distinctive look and the possibility of using unique new materials, the genre quickly attracted an avid following. This enlightening documentary focuses on Russian painters of the period, including Alexander Benois and Kazimir Malevich, who left their mark on modern art.