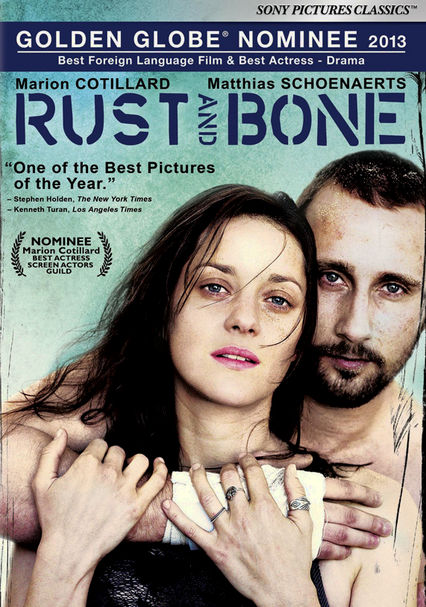 2012 R 2h 2m Blu-ray / DVD
Unemployed kick boxer Ali, who's struggling to raise his young son alone, strikes up a relationship with Stephanie, a whale trainer who survives a terrible accident at her marine park. As Stephanie faces disability, she seeks comfort with Ali.

Parents need to know that Rust and Bone is an oddly beautiful combination of brutality and beauty that explores some very difficult subjects, including what it's like to lose your limbs, to not know how to be a parent, to be tossing around in a hard scrabble world with a young child you aren't equipped to raise, and how hard it is to tame a beast when the beast is yourself or someone you love very much. There's also full-frontal nudity (albeit briefly), quick flashes of intense sex scenes, swearing (in French with English subtitles), smoking, and drinking. Some fight scenes are bloody and gritty and show faces kicked and beaten to a pulp. But the film also has tons of hope and is made with great care and honesty.

Full-frontal nudity, with a man's genitals and a woman's pubic hair briefly shown. A man's backside is glimpsed often, sometimes while he's straddling a woman. A woman's breasts are shown both from afar and in close-up, sometimes during what appears to be sex. Quick flashes of intercourse (though genitalia aren't seen then).

Fairly brutal, bloody beatings take place at secret fights where spectators egg the competitors on to hit and cripple one another. Teeth are lost, heads are bashed, bodies are bruised and battered. There's also a scene in which a whale crashes into a stand and, later, attacks its handler; there's blood in the water. Close-ups of wounds, injuries, and gashes. A man screams and grabs his child, and he accidentally hits his forehead on a piece of furniture. A child is shown as if he's drowning. A woman throws glasses at men in bars, cutting their faces. Men leer at her, eye her body openly, and say brazen, disrespectful things to her.

Relatively infrequent use of words including "f--k," "s--t," "bitch," damn," and "a--hole." The words are said in French and subtitled in English.

Hope springs in the direst of places -- such as months after a horrific accident or when a person causes a loved one to lose her job. You might be in the depths, but there's always one sure way to go: up.

Some brands shown, but they're mostly French companies that may not be familiar to American audiences. More recognizable labels seen include Under Armour and Nike.

Some cigarette smoking and drinking, sometimes to the point of inebriation.