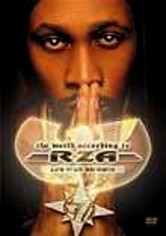 2004 NR 2h 0m DVD
As a member of rap group Wu-Tang Clan, RZA enjoyed great success and acclaim. Now on his own, the rapper is shifting his focus to collaborations (as he does on this release), performing with artists from both the hip-hop and R&B genres. Also included is a behind-the-scenes documentary starring Xavier Naidoo, IAM, Saian Supa Crew, Blade and Deborah Cox, as well as a making-of featurette for the "I've Never Seen" video and single.