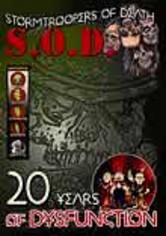 2005 NR 0h 45m DVD
Metalheads S.O.D. scored an underground hit in the 1980s with the album "Speak English or Die." This video features hours of unreleased footage, most of which was shot by fans with camcorders for that genuine "in the trenches" concert experience. Also includes five mini-concerts from around the world, new ballads to Freddy Mercury, INXS, Tupac and Frank Sinatra, backstage comments and shenanigans, and more.