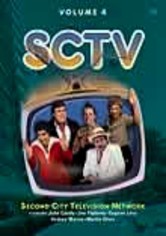 1983 NR 6 discs
Join station owner Guy Cabellaro (Joe Flaherty), Johnny LaRue (John Candy), plus cast members Eugene Levy, Andrea Martin, Catherine O'Hara and the rest of the SCTV miscreants as they forge a path of comic destruction that will have you shaking your head in disbelief. This collection of episodes from the popular sketch comedy series delivers the show's signature parody humor and razor-sharp satire.