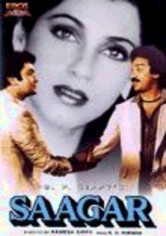 1985 NR 2h 50m DVD
Mona D'Silva (Dimple Kapadia), the daughter of a tavern owner in a seaport village, unleashes a tempest that engulfs the whole town after she becomes romantically entangled with Ravi (Rishi Kapoor), the grandson of a high-hat dowager (Madhur Jaffrey). Wanting Ravi to wed someone of equal standing, grandma tries to end the liaison. But when Ravi disobeys his grandmother, she sets in motion a scheme that threatens the jobs of the town's fishermen.