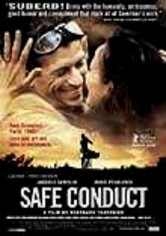 2002 NR 2h 43m DVD
This epic film tells the true story of French filmmakers living in World War II Paris during the German occupation -- in particular, Jean Devaivre (Jacques Gamblin), an assistant director with a family, and Jean Aurenche (Denis Podalydes), a womanizing and freethinking screenwriter. Conflict arises as a rift forms between those who collaborate with the German production companies and those who strive to find their own ways to rebel and survive.