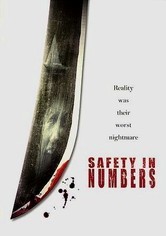 2005 NR 1h 25m DVD
Reunited for a television special, six contestants from a popular Australian reality show are dispatched to a remote isle -- where a twisted killer transforms the reunion into a bona fide game of survival. Expecting to find a production crew waiting for them, the former competitors instead find themselves stalked by a madman who begins bumping them off one by one. The cast includes Jessica Napier, Ben Tari, Henry Nixon and Tasma Walton.