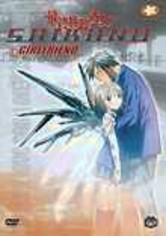 2004 NR 4 discs
In this animated adventure, teen couple Shuuji and Chise travel to Sapporo one day only to be terrified by a fleet of foreign bombers. All seems lost until a mysterious red light destroys the invaders and saves the city. Shuuji is stunned when Chise reveals that she's the source of the mystery weapon. Life becomes both exciting and complicated for average teenager Shuuji and his cyborg girlfriend engineered for mass destruction by the government.