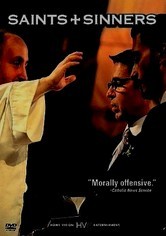 2004 NR 1h 11m DVD
This moving documentary tracks the struggles of a New York gay couple, Edward DeBonis and Vincent Maniscalco, who have but one goal: to get married and be recognized by the Catholic Church. As the two seek to acknowledge their seven-year relationship while facing opposition to their union from those they know as well as complete strangers, their ordeal puts a heart-wrenching face on a hotly debated issue.