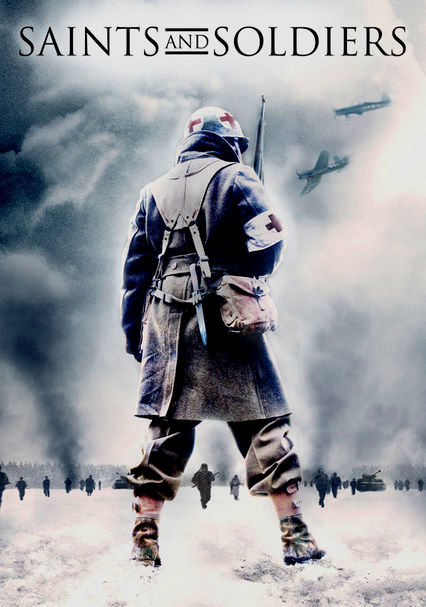 2003 PG-13 1h 30m DVD
In a story based on actual events, a small band of Allied soldiers are trapped behind enemy lines with information that could save thousands of American lives. Outgunned and ill-equipped, they battle a frigid wilderness and roving German troops.

Parents need to know that Saints and Soldiers is a 2003 low-budget World War II-themed movie about five Allied soldiers trapped deep behind enemy lines who need to get important information back to their armies that could save thousands of soldiers from an enemy attack. There is frequent battle violence -- dead bodies and blood, as well as a graphic scene in which one of the main characters is shown getting a bullet removed from his thigh. In a flashback scene, a soldier recounts throwing a grenade into a bombed-out church and accidentally causing the deaths of two women and six kids. There is cigarette smoking and the occasional mild profanity ("hell" and "damn"). Overall, fans of World War II movies should enjoy this film inspired by the true story of what transpired in the wake of the Malmedy massacre and the courage, valor, and camaraderie that develops among these four surviving soldiers.

Frequent war violence. Dead soldiers are shown on the battlefield covered in blood. Soldiers are shown being shot and killed at close range. After a solider is shot in the thigh, his injury is graphically shown as a medic works to remove the bullet by slicing open the thigh and working around exposed muscle. A French woman who has allowed Allied soldiers to hide out on the first floor of her house is grabbed roughly by a German soldier on patrol; he pulls and yanks at her dress, implying a potential rape. In a flashback scene, one of the main characters, who is suffering through shell shock, is shown throwing a grenade into a church, accidentally causing the death of two women and six children.

This movie shows, through discussion and example, how faith, valor, and camaraderie can help people who are going through extraordinarily difficult circumstances.

Characters smoke cigarettes. A running joke is how an English paratrooper refuses to share his cigarettes with one of the American soldiers.