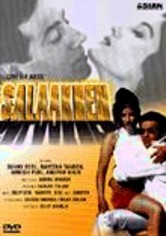 1998 NR DVD
Upright citizen Sachidanand (Anupam Kher) witnesses a rape and murder and agrees to testify against the son of a prominent official. Pressured by the young man's corrupt lawyers, Sachidanand commits suicide in open court. Now his son, Vishal (Sunny Deol), wants retribution. He breaks the accused rapist out of jail and uses him as bait in the first in a series of killings intended to avenge his father's death.