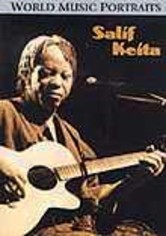 2004 NR 1h 0m DVD
World music phenomenon Salif Keita treks back from his home on the outskirts of Paris to his native Mali, taking viewers on a journey to his musical roots. Along the way, he makes stops at venues where he played long ago, visits village elders who taught him how to sing traditional songs that have influenced his music, and shares the pain of growing up albino in a community that at times shunned him for his appearance.