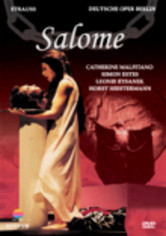 2005 NR 1h 49m DVD
Soprano Catherine Malfitano delivers an appropriately graphic performance in the title role of composer Richard Strauss' passionate and powerful one-act opera, which gave rise to protests and was proscribed in numerous cities when it was originally staged in 1905. Joining the mesmerizing Malfitano in this 1990 production are Simon Estes as Jokannan and Leonie Rysanek as Salome's mother, Herodias. Giuseppe Sinopoli conducts the orchestra.