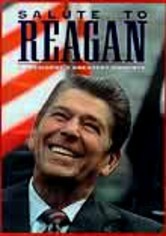 2002 NR 0h 42m DVD
This documentary captures the best of former president Ronald Reagan's shining moments in office and his most memorable speeches, including his plea to Russian leader Mikhail Gorbachev and his soothing address after the Challenger disaster that guided the nation in a time of grief. Also featured is his wife Nancy's moving homage during the 1996 Republican National Convention and other historically significant events.