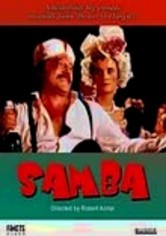 1996 NR 1h 40m DVD
Larger-than-life Ottó Szamba (Róbert Koltai) is a theater actor in his small Hungarian village. Everyone in town loves him -- except his son Ottó Jr. (László Görög), who's so embarrassed by his hammy father that he shuns the stage. But when he enters college, the younger Ottó discovers he can't escape the acting bug. Koltai co-wrote and directed this satire on small-town attitudes and big-time egos, co-starring Éva Kerekes and Judit Pogány.