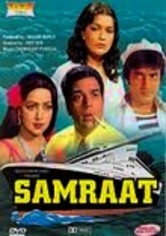 1982 NR 2h 22m DVD
When a cargo ship sinks after an explosion, the vessel's skipper, Capt. Chawla (Om Shivpuri), finds himself arrested and imprisoned for smuggling gold in this action thriller directed by Mohan Segal. But Chawla's daughter (Zeenat Aman) is convinced her father is blameless and hires divers Ram (Dharmendra) and Raju (Jeetendra) to investigate. Soon, they're up to their ears in gold bars … putting Chawla's claims of innocence in doubt.