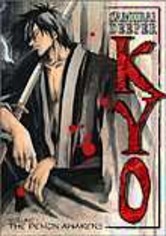 2003 NR 6 discs
During the epic battle of Sekigahara, two samurai with deadly agendas fought separately from the rest of the battle. As Kyoshiro and Demon Eyes Kyo dueled, a shooting star slammed into the Earth, engulfing them both. Years later, the one who survived discovers that he harbors the spirit of his rival deep within himself -- and when that spirit awakens, the &NFireal&NFi_; battle is unleashed!