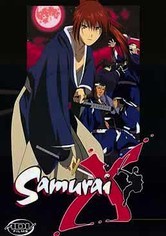 2000 NR 4 discs
In 19th century Japan, the land is torn by warfare and rebellion. As a result, small bands of soldiers rise up and muster the courage necessary to attempt an overthrow of the tyrannical Tokugawa Shogunate. Enter Kenshin, a young orphan whose fighting skills were honed by the great swordsman Hiko. His world is thrown into confusion by the arrival of a mysterious woman named Tomoe -- can she help the assassin become a real man?