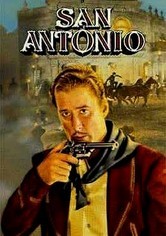 1945 NR 1h 49m DVD
Rancher Clay Hardin (Errol Flynn) learns that Texas saloon keeper Roy Stuart (Paul Kelly) is also the leader of a vicious gang of cattle rustlers. Against the advice of his friend and mentor, Charlie Bell (John Litel), Hardin sets out to rid the city of Stuart and his men. Hardin's mission, aided by Stuart's new bar singer, Jeanne Starr (Alexis Smith), and the reluctant Bell, leads to a climactic shootout at the Alamo.