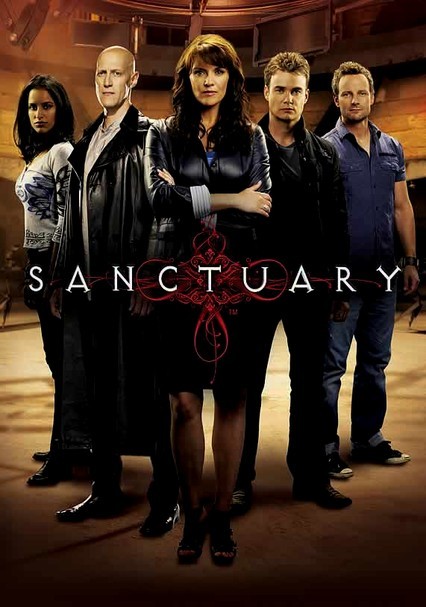 Backed by an eager team of experts, scientist Helen Magnus (Amanda Tapping) spends her time tracking down monsterous paranormal creatures. But while a few specimens are safe, others are downright dangerous in this Syfy network drama. Based on a high-definition Web serial -- the first sci-fi series of its kind -- this show is the first TV series to feature live actors against a backdrop of virtual sets created with computer-generated animation.

In this exciting sci-fi series, 157-year-old scientist Helen Magnus (Amanda Tapping) and her daring team operate a secret refuge for "abnormals" -- supernatural beasts, monsters and other creatures that cannot be explained. In the show's second season, forensic psychiatrist Will Zimmerman (Robin Dunne) adjusts to working in the Sanctuary, the group investigates a mysterious rash of robberies and Helen survives a plane crash in the mountains.

Syfy Channel's Emmy-nominated series returns for a third season of innovative visuals and gripping plot twists as scientist Dr. Helen Magnus (Amanda Tapping) and her dedicated team study the "abnormals" that live among humans. After locating forensic psychiatrist Dr. Will Zimmerman (Robin Dunne), who was abducted by a powerful abnormal, Magnus confronts critics who order her to relinquish control of the Sanctuary project.

Thanks to an influx of Hollow Earth refugees, Dr. Helen Magnus and her crew are faced with an all-new crop of "abnormals" -- some good and some not. Meanwhile, Worth is making plans to use a time machine to save his ailing daughter.

Parents need to know that this sci-fi show -- which began its life as a popular Web series -- assumes that monsters are very real and that they need to be tracked down and captured. That process often entails a fair bit of suspense and violence (often involving weapons and occasionally deadly), which could unsettle young viewers -- as could the sometimes-creepy monsters themselves. But on the whole, the series is on the tame side for older tweens and up: There's hardly anything in the way of sexual content, salty language, or drinking and drugs.

No nudity or sex, though there is some flirting between Will and Ashley.

Some of the abnormals are benign, but many are quite dangerous, and their attacks can be violent, deadly, and gory. Though the Sanctuary staff has no desire to hurt these creatures, they're often forced to subdue their quarry using stun-guns or darts with sleep-inducing drugs. Ashley is often heavily armed; she's quick with both lethal and non-lethal weapons and sometimes engages in martial arts combat.

The Sanctuary is a mysterious organization that exists outside standard law enforcement channels, and though Dr. Zimmerman sometimes crosses paths with his former colleagues on the police force, he must keep his true activities and motives secret. The team sometimes deals with black market weapons brokers. The most dangerous creatures are locked up deep within the Sanctuary; some are willing to stay there for their own protection, while others pose a danger to society and are held against their will.