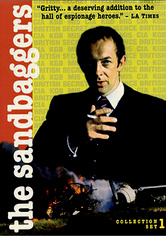 1978 NR 3 discs
This taut British spy series centers on the elite covert operations section of British Intelligence, nicknamed the Sandbaggers, and their boss, Neil Burnside (Roy Marsden), who battles more with British bureaucracy and maddening red tape than with Red agents. The series was created by Ian Mackintosh, a former intelligence officer who mysteriously vanished while flying a small plane in Northern Canada in 1980.