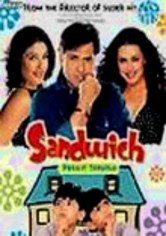 2006 NR 2h 0m DVD
In this wacky Bollywood sex comedy, a man (Govinda) finds himself "sandwiched" between two wives -- one (Raveena Tandon) in the city of Mumbai and one (Mahima Chaudhary) in the village of his family. To further complicate matters, the man's double arrives on the scene claiming to be him in this high-spirited farce from director Anees Bazmee.