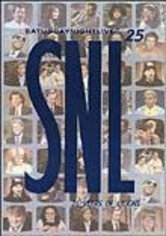 2000 NR 2h 42m DVD
Live! From New York! It's a star-studded celebration of 25 years of "Saturday Night Live!." A comedy institution, "SNL" has launched the careers of comic greats like Bill Murray, Eddie Murphy and Adam Sandler. Featuring a feast of classic clips, hilarious new comedy (with guests such as Chris Rock and Tom Hanks) and musical performances by The Eurythmics, Al Green and Elvis Costello, this recap is a hilarious look back at the first quarter century.