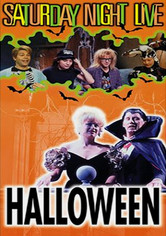 1998 TV-14 1h 0m DVD
Midwestern metalheads Wayne and Garth (Mike Myers and Dana Carvey) host this anthology of Halloween-themed SNL sketches drawn from the show's many seasons, including a Coneheads skit in which the clueless aliens hand out beer to trick-or-treaters. Other sketches feature John Travolta as a Count Dracula mistakenly labeled as gay, Adam Sandler offering cheap costume suggestions on "Weekend Update," Chevy Chase as the cunning Land Shark and more.