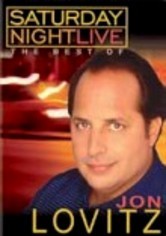 2005 NR 1h 30m DVD
From Hanukkah Harry to pathological liar Tommy Flanagan, this trenchant retrospective contains some of Jon Lovitz's funniest moments on "Saturday Night Live." Between 1985 and '90, he was a favorite among fans and soon ventured into films. The compilation includes sketches featuring Lovitz's off-the-wall characters, his memorable appearances as Annoying Man on "Weekend Update" and celebrity guests such as Robert De Niro and Mick Jagger.