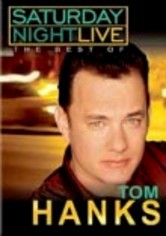 2004 NR 1h 41m DVD
One of the comedy show's favorite hosts, this compilation presents Oscar-winning actor Tom Hanks in some of his most notable "SNL" skits -- from spoofing his films Big and Cast Away to portraying inimitable characters such as Mr. Short-Term Memory. This collection of gems includes Hanks being inducted into the "Five Timers Club," along with other frequent hosts Steve Martin, Elliott Gould and Paul Simon.