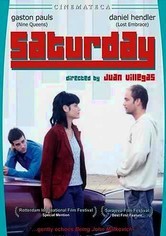 2001 NR 1h 12m DVD
The lives of six young people, including Argentinean star Gaston Pauls as himself, intertwine over the course of one Saturday in a barren section of Buenos Aires. Meditations on fate, fear and love ensue in this chatty, low-key offbeat comedy -- part of the Argentinean new wave -- by writer-director Juan Villegas, who won the Best First Feature award at the Sarajevo Film Festival in 2002. Daniel Hendler co-stars.