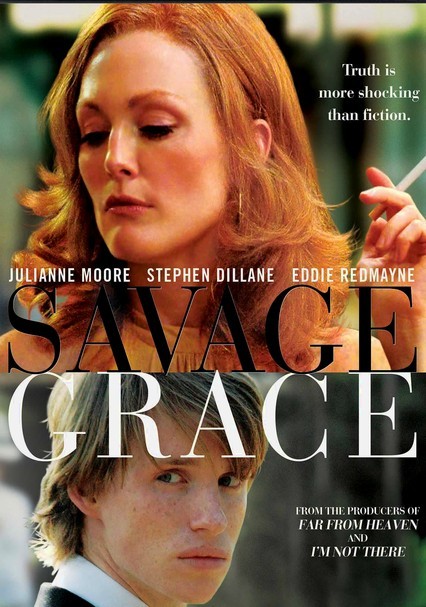 2007 NR 1h 37m DVD
Director Tom Kalin compellingly recounts the real-life circumstances and events that led to the murder of socialite Barbara Daly Baekeland (Julianne Moore) at the hands of her son (Eddie Redmayne) in 1972. Infidelity, family dysfunction and incest are all part of the unsettling brew in this shocking drama (based on a true story) also starring Stephen Dillane as Barbara's coldblooded husband. Howard A. Rodman penned a Best Screenplay nominee for an Independent Spirit Award.

Parents need to know that this very mature indie film, which is based on a true story, is steeped in amoral and sexual behavior among the idle rich -- culminating in a sexual relationship between a mother and her son. The movie unflinchingly depicts raw, uncomfortable moments of sexual behavior and contains nudity (including full-frontal female), same-sex encounters, implied underage sex, and more. There's also plenty of language, and some violence, as well as drinking, smoking, and drug use. Teens who know star Julianne Moore's terrific acting work from bigger films like Children of Men and The Hours may be intrigued to see her here, but it's an edgy, uncomfortable film that's definitely not meant for kids of any age.

Lots of graphic discussion of sex, and extensive male and female nudity (including full-frontal female). Moore's character actively seeks out random encounters with strangers and is seen in lingerie; in one scene, her hand is shown on a partner's pants fly as she prepares to manually stimulate him (the actual act isn't shown on screen). There's rough (albeit consensual) sex; same-sex encounters between consenting adults, extended scenes of sexual activity and orgasm. An experimental sexual act between two underage boys is implied, and a three-person sexual encounter is seen when Moore's character begins a sexual relationship with her own son.

Guns are fired; viewers see the aftermath of a suicide attempt, including bloody wounds; a character is fatally stabbed.

The idle rich discuss hypothetical actions for $10 million -- eating human flesh, sleeping with a friend. Much is made of the differences between the well-off and the less-fortunate. A character quotes their great-grandfather's axiom that "One of the uses of money is that it allows one not to live with the consequences of our mistakes." Many sexual taboos are violated heedlessly and eagerly (including a woman who has a sexual relationship with her own son).

Brands like Chanel are mentioned, and there's extensive discussion of "Bakelite," the first synthetic material (and the source of the Baekeland fortune).

Lots of period-accurate cigarette smoking, plus cigar smoking, marijuana use, constant drinking and discussion of hangovers, etc. A supporting character smuggles hashish; another character abuses sleeping aids as part of a suicide attempt.