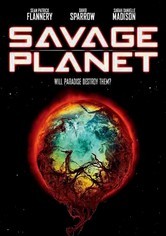 2006 NR 1h 28m DVD
Sean Patrick Flanery (The Boondock Saints) stars in this made-for-television movie as the leader of a group of scientists who stumble upon a deadly race of mutants while searching for a new planet for the people of Earth to inhabit. Reagan Pasternak, Sarah Danielle Madison, David Sparrow and James McGowan also star in this sci-fi adventure directed by Paul Lynch.