Savage Sinema from Down Under: Defenceless 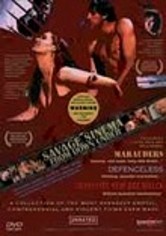 Savage Sinema from Down Under: Defenceless

2004 NR 1h 38m DVD
In this unique silent film, Elizabeth Peace (Susanne Hausschmid), an environmentalist mother, is brutally murdered by a group of real estate developers and returns from the grave to seek bloody revenge on her attackers. Australian auteur of controversial cinema Mark Savage has honed his style of raw, unapologetic filmmaking that's generated critical acclaim as well as notoriety in his native Melbourne for its heightened violence and eroticism.