Savage Sinema from Down Under: Marauders 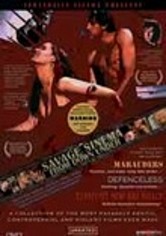 Savage Sinema from Down Under: Marauders

1986 UR 1h 14m DVD
While tracking a young couple who are making their way to a remote cabin, two psychotic maniacs go on a relentless killing and raping spree, leaving behind a wake of destruction in this disturbing horror film. Australian auteur of controversial cinema Mark Savage has honed his style of raw, unapologetic filmmaking that's generated critical acclaim as well as notoriety in his native Melbourne for its heightened violence and eroticism.